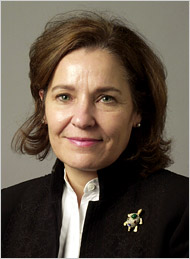 And what kind of Judge is she? In 1998, she wrote the opinion rejecting a new trial for Roy Criner, a mentally retarded man convicted of rape and murder, even though DNA tests after his trial showed that it was not his semen in the victim. “We can’t give new trials to everyone who establishes, after conviction, that they might be innocent,” she later told the television news program “Frontline.”

Shame on Texas. Conduct like this, she should be off the bench.
Posted by Indefensible at 1:43 PM

How is it not an ethics violation to campaign as "Pro-Prosecution"? I could understand "Pro-Justice" but Pro-Prosecution is campaign slogan based on blatant partiality.