He came into this world naked, spent much of his time in it nude, but will - against his specific wishes - depart it fully clothed.

Robert Norton, of Pekin, Illinois, was often prosecuted during his lifetime for gardening and wandering outside his house in the nude. 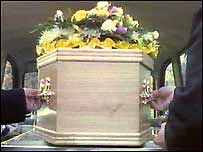 Clothed in his coffin:

Brenda Loete said she never spoke to Norton despite living next door to him for more than a decade.

"We didn't really know him. We just had him arrested," she said.

She had spent years taking her daughter to the park rather than letting her play in the garden because of the naked old man next door, she said.

"Normally, if we had him arrested in the spring he'd be gone for the summer and we wouldn't have to worry about him until the next spring."

The cycle of arrest and prosecution lasted over four decades, until the World War II veteran was admitted to a nursing home.

He fought 20 arrests for indecency since his first in 1962, arguing that he had a constitutional right to public nakedness, the Associated Press reported.
Posted by Indefensible at 8:57 PM