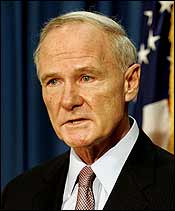 The former prisoners -- two of whom spent about 19 years each behind bars for crimes they did not commit -- have filed claims dating back to January under a law that provides a maximum of $500,000 for erroneous convictions. However, Reilly, who represents the state in such claims, appears to be adopting an adversarial approach.
Posted by Indefensible at 1:31 AM