To Rudy's love getaways.
Posted by Indefensible at 2:04 PM No comments:

Who knew there was a Kansas City Jewish Chronicle?
Posted by Indefensible at 5:01 PM 1 comment:

Posted by Indefensible at 3:34 PM No comments:

Ok, This is wickedly cool. It tells you how much the taxi fare should be from any two points in NYC, making it much easier to figure out if you've been scammed. (Which it turns out, I haven't)
Posted by Indefensible at 11:32 PM No comments:

The University of Chicago Magazine?

Of all the places to be profiled, your own alumni magazine is pretty great.
Posted by Indefensible at 10:13 PM 1 comment:

It's old, and you've probably already seen it. Still...

Juror: Looks like we convicted an innocent guy!
Posted by Indefensible at 4:34 PM No comments:

Posted by Indefensible at 6:32 PM No comments:

This you won't believe!

Welcome to Conservative Correctness
Posted by Indefensible at 12:18 AM No comments:

Here it is in a nutshell...

Posted by Indefensible at 12:57 AM No comments:

World’s worst prosecutor smacked down by his own constituents

So it looks like one good thing happened this little-noticed election day. Comeuppance has finally come for Astoria Oregon Prosecutor Joshua Marquis, the staunch death penalty defender who has argued over the years that innocent people basically never get convicted and that even DNA exonerations don’t mean someone is actually innocent. Though the final tally is still unofficial, it seems that the residents of Clatsop County have defeated a ballot measure Mr. Marquis supported which sought to make him one of this highest paying DA’s in the state.


The hysterical history of the proposal, tells you everything you need to know about Joshua Marquis and provides a pretty window into the particular mindset of a rabid prosecutor. Marquis, a small town DA with an big city ego ingratiated himself to media outlets around the country by seeming willing to defend almost any prosecutorial excess. This was probably a lot of fun and it all went well for a while. In part due to his burgeoning national profile Marquis was re-elected to be the DA of Clatsop County. But having national aspiration can also lead one to ignore the home fires, and after repeatedly failing to turn in required performance evaluations and being dogged by suggestions that he is “abusive to staff” his own county commissioners voted to stop paying him the stipend they traditionally awarded him on top of his state salary.

Now most people when they have their pay cut feel stung and many with some spine might either resign or come in to their bosses and say “hey, clearly you’re unhappy, so let’s figure out how to make this better.” But no. A guy who was trying to become president of the National Association of District Attorney’s isn’t gonna just get the message. (Marquis recently lost that presidential election, presumably because even a group of prosecutors doesn’t want someone quite as rabid as he is leading them). So what did Marquis do? The end around.

Marquis supported an effort to gather thousands of signatures in order to make a law saying that he should get more money. Instead of making peace with his commissioners, or trying to understand why they might be unhappy with his antics, he arrogantly believed the voters would just authorize a pay raise. This, as much as anything else Marquis has written or said provides genuine insight into his view of what the law is and how it is to be used. The law, he seems to think, is an instrument of his own personal advancement, and it is to be used for precisely those purposes. It isn’t hard to see why that’s a dangerous attitude in a prosecutor.

Thank heavens, the citizens of Clatsop County thought different.
Posted by Indefensible at 11:24 AM 1 comment:

The strike and the issues...

Posted by Indefensible at 9:34 AM No comments:

It's from Blonde Justice: and it's great.
Posted by Indefensible at 12:09 AM 1 comment:

It's the stock price stupid...

Want to end the strike? Figure out a way to hit the stock price.
Posted by Indefensible at 6:04 PM No comments:

Ok, This is totally hilarious! My favorite bit is when the big conservative authors whine “Why is Regnery acting like a Marxist cartoon of a capitalist company?” Um, because they are. THis is what you get little workers. Shafted like the millions of hard working Americans whose labor you spit on, while extolling the virtue of corporations.

Today, I walked a picket line for the first time since the ill-fated Legal Aid strike of 1993. Why am I on strike? Well, as a newly minted member of the Writer's Guild of America, it turns out we're striking because the guild has demanded a very small share of of the income generated from the distribution of content (jokes, drama, etc) over the internet. Just what a small chunk the guild wants is quite astonishing.

How much do you think the writer should get on the sale of a twenty dollar DVD? Pick a number and scroll down below the picture of my friend Randy and I on the line... 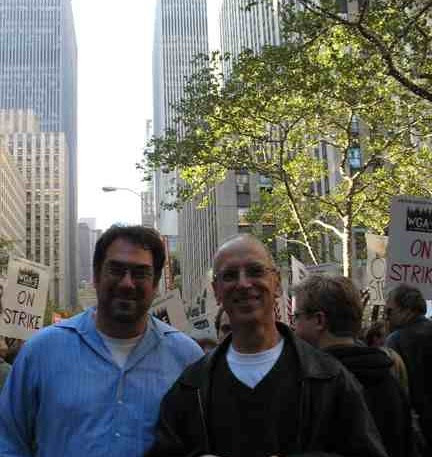 Ok, what did you guess? (leave your guesses in the comments section). The answer is that the writer gets about 4 cents. That's not 4 cents on the dollar, that's 4 cents total. And on internet stuff the producers offer is zero. Low, I think by anyone's standards.

Anyhow, I've got lots of thoughts about the picketing itself, but they'll have to wait for now...
Posted by Indefensible at 6:20 PM No comments:

An Ohio judge has ordered the arrest of a county public defender.

Judge John Plough ordered sheriff's deputies Wednesday to take Assistant Public Defender Brian Jones into custody because he was not prepared to go to trial. He was held five hours before he was released on bond.

The judge was pissed off even though the PD had only had the case for a day or two.

This is the second time Plough has ordered the arrest of a public defender, said Dennis Lager, the county's chief public defender. He said Plough also threatened to take similar action twice in 2006.
Posted by Indefensible at 6:02 PM No comments:

Terrorism laws applied not to international terrorists, but to run of the mill murders I said it then and I'll say it again. It's a stupid useless state statute. Pass a nice sounding law, and all you do is give prosecutors more power.
Posted by Indefensible at 9:38 AM 1 comment: