Until a friend of mine forwarded this to me (thanks ANB) I had no idea it all looked so real. Better get back to work...
Posted by Indefensible at 4:36 PM 2 comments:

So this is why the only proper way to insure funding for PD's offices is to pass a law (concomitant with the creation of any state-wide system) which requires PD funding to be directly correlated to the budget of prosecutor's offices. That way when the prosecution gets more money the defense gets more money. Otherwise you wind up like Georgia.
Posted by Indefensible at 2:39 AM No comments:

The Road to Perdition...

Seat 4D. That’s in the first class compartment. The one where you sip cocktails before take off. Where the nuts say “Gourmet Nuts” on them, where a fabulously gay steward notices that you’re reading a script and is just dying to hear about your new project.

I kind of can’t believe I have a new project. My new project is to fly to LA and learn to write a television show.

In the line at the Budget Rent-A-Car a very handsome young kids asks me if “I’m in the industry?” I don’t really know what to tell him and as I stammer, he says “You must be an attorney.” “Yes” I say relieved. “An Attorney.” Such clarity there. An attorney, an Industry attorney. I’m still kicking the question around in my head, telling myself I need to get used to being “In the industry” when the woman in front of me veers off to a beckoning agent, and I am left alone at the front of the queue. One sharp “Next!” and I’m handing over my license and credit card, looking to make short work of the transaction. “I don’t need the insurance, and I’ll return it full.” I say in my practiced bored car-renting voice. “Great” says the chipper woman, swiping my card. “You have reserved an economy…” “Yeah, that’s fine…” I say hoping to avoid a lengthy upsell. “But would you mind if I put you in a convertible?” “A convertible…” Strangely, I actually think about it. I actually ponder for a moment the allure of a sunny LA day in a rag top before killing that particular reverie. “Thank you, that’s very sweet but…” I say demurring. “Oh, it’s the same rate” she says. “And it’s a lot of fun to drive.” I look at her blankly as she slides the keys to an essentially new Nissan two seater across the counter at me. She smiles again. “Welcome to LA!”

I’m already sunburned.
We drove the ragtop up into the mountains, where under the beating sun, we donned masks, grabbed guns and played paintball.

Paintball is like war for fat people. I make a large target.

Down in the valley, we stop for breakfast or lunch or brunch at some crazy cool place advertising BBQ. Turns out they don’t smoke any meat there, but they do have a hell of a breakfast ham. The waitress is very sweet, and she brings me a diet coke fit for a blue whale. I turn my head to nod a thank you to her, and on the wall behind me, I notice a signed picture of a grinning MPG—it’s a publicity still from a show I don’t know. I nudge RGS, “Hey look—we know him.” She nods at the strangeness. Somehow we know the guy whose picture is up on the wall at some random restaurant in some previously unknown valley. We know that guy.

Also, The bed in the guest house is the biggest thing I’ve ever seen.

Gosh, what a shock!

A prosecutor who deleted a bunch of e-mails in violation of a subpoena, and whose other e-mail messages included endearments to his executive secretary, sexual and racist jokes and pornographic videos. It it really a shock that this jack-ass was not just a prosecutor, but a tough-talking militant guy who has incarcerated folks for a living since 1977? Just another disgrace to a generally disgraceful profession. 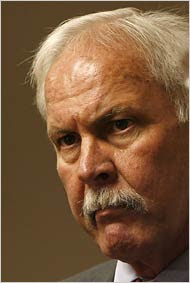 The Now Disgraced Prosecutor Charles Rosenthal.
Posted by Indefensible at 8:41 AM 2 comments: 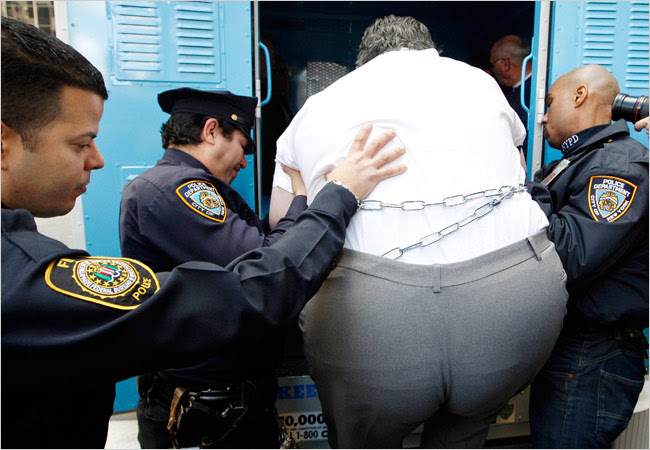 Posted by Indefensible at 1:45 AM No comments:

An excellent Expose of Bush's Hardheartedness

It's a piece called Begging Bush’s Pardon which documents just how awful the administration has been on the compassionate part of conservatism--presidential pardons. 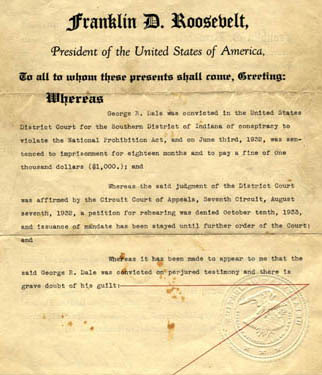 A Pardon Notice from the Roosevelt Administration
Posted by Indefensible at 10:11 AM No comments:

How Likely Are Sex Offenders to Repeat Their Crimes?

Like many hysterical folks over the last few years, Fox News (like the Wall Street Journal) has said of child molesters, “Not only are they almost certain to continue sexually abusing children, but some eventually kill their young victims.”

As it turns out, the numbers don’t bear this out. Not even close.
Posted by Indefensible at 6:19 PM 2 comments: