Jail and Jobs - Look at these numbers...

--Incarceration reduces former inmates’ earnings by 40 percent when compared to demographically similar counterparts who have not been imprisoned.

--Young black men who dropped out of high school are more likely to be incarcerated than employed.


Check out the shocking charts here...
Posted by Indefensible at 12:21 PM No comments: 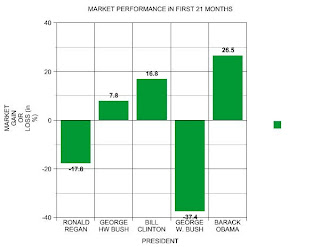 
Ok, so let's all agree to just trust the actual numbers which make clear that Democratic presidents have been great for the market, and that that Obama in particular has been wildly effective in shepherding in a massive recovery So from now on, instead of whining about how much better we need to do, let's try, just for once crowing about the biggest market rally in the first half of a new president's term in more than 45 years.
Posted by Indefensible at 1:09 AM 1 comment:

The right wing pundits constantly yammer about their faith in the markets. So in light of all the criticism of Obama and economic policy, I thought I'd take a look at how the markets actually performed in the first 21 months various presidencies.

Ok, so can we please cut out all this crap now? Let's all be good little republicans and trust the actual numbers which make clear that democratic presidents have been great for the market. The market LOVES democrats, and that what the numbers actually make clear is that Obama has been astonishing at rallying the market, and wildly effective in shepherding in a massive recovery. Indeed, as the numbers make clear, Obama can legitimately claim to have presided over the biggest first 1/2 term market rally in more than 40 years.
Posted by Indefensible at 4:25 PM 2 comments:

Yes indeed, after some fiddling around, INDEFENSIBLE is now available for the kindle. If you want to order--
just click here!

And yes...the Ipad version should be coming soon.
Posted by Indefensible at 4:06 PM No comments: