This is really troubling...
Posted by Indefensible at 9:54 AM No comments:

Interview with "The Story" about Sex Offender Village...

I know it's silly, but even after having spent a fair bit of time in the entertainment world I still get a thrill when I see the name of a friend come across the screen on a show I actually love.  Similarly it's particularly cool when a show I actually listen to calls me for an interview.   Which is what happened with a show that airs here on the west coast called "The Story" with Dick Gordon.  They saw the sex offender Op-Doc and called to ask if I'd chat with them (Um...Yeah!).

While Lisa did the show from New York, I got to go down to the NPR West studios which itself was exciting.  Well, here's the result.
Posted by Indefensible at 12:27 PM No comments:

My directorial debut on the NYT

Very proud of this piece. It is the beginning of my work on the subject.

Hopefully this will let Lisa and I find the funding we need to build this into the full length doc we're hoping to do.
Check out the placement and let me know your thoughts... 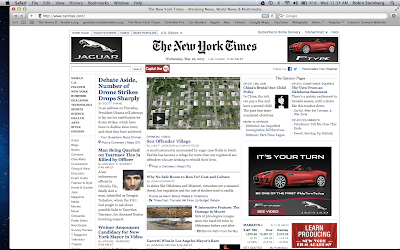 My new Op-Ed in the NYT: Waiting and Waiting for Justice

The times just posted my new Op-Ed. It's about...justice.

Or more accurately injustice, and how we can make the endemic delay in the criminal justice system more tolerable....
Posted by Indefensible at 2:58 AM No comments: