"'Though these are pregnant women,' said Dina Tyler, a spokeswoman for the Arkansas Department of Corrections, 'they are still convicted felons, and sometimes violent in nature. There have been instances when we've had a female inmate try to hurt hospital staff during delivery. 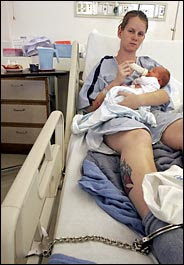 'Dee Ann Newell, who has taught classes in prenatal care and parenting for female prisoners in Arkansas for 15 years, said she found the practice of shackling women in labor appalling. 'If you have ever seen a woman have a baby,' Ms. Newell said, 'you know we squirm. We move around.'

Twenty-three state corrections departments, along with the federal Bureau of Prisons, have policies that expressly allow restraints during labor, according to a report by Amnesty International U.S.A. on Wednesday"

"This is the perfect example of rule-following at the expense of common sense," said William F. Schulz, the executive director of Amnesty International U.S.A. "It's almost as stupid as shackling someone in a coma."
Posted by Indefensible at 12:00 AM