Perhaps you've read about Steven Caruso, the foul-mouthed financial planner who got held in contempt for calling a defendant he presumed guilty a 'scumbag' during jury selection. 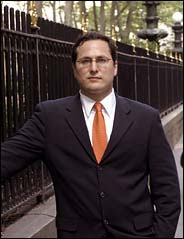 Well, Judge William Wetzel found the term offensive and ordered him back for a contempt hearing--cue the public caterwauling...

Both the NEW YORK TIMES and NEWSDAY ran sympathetic features on this moron. Now let's be clear--Wetzel's not going to put the guy in jail--though it's likely he'll fine him 250 bucks or so. But how is it that when rich white folks presume defendants guilty, and make a mockery of system by acting in ways that are beyond disrespectful, they get the kid gloves. But when poor folks make innocent mistakes during voire dire, and get put in jail, there is hardly a peep.

For shame.
Posted by Indefensible at 4:13 PM

Well, he could have lied like all the other rich SOBs (of my social class) do, and said they have no opinion, when you know damn well they do.

True Enough,
But there might also be a middle ground--one of honestly without 'scumbagism'

A criminal court judge was offended by the word "scumbag"? That's pretty mild. Doesn't he have to deal with, like, murderers and baby-rapists? And he's offended by "scumbag"?

Caruso now faces criminal contempt charges from the angry Judge William A. Wetzel of Manhattan Criminal Court, and the Times coverage is disapproving. (Andrew Jacobs, NY Times, Jul. 2 (via Betsy Newmark)). However, AP reports that the judge protests that Caruso "was screaming at the top of his lungs," and Newsday notes that Caruso also gave a smart-aleck response when asked his profession, so there may be more to the story than the recounting by Caruso's defense attorney.

Heh. That reminds me of a guy on one of my panels who announced to the entire panel that he was an expert in reading body language, and he could already tell that my client was guilty. I wish the judge would have held him in contempt!

Why must you player-hate "rich white folks" like you do? This Caruso is an American hero...why must he be assailed for working hard to accumulate wealth...it is about time this country stops attacks based on political correctness and realizes the true problems we've got around here. The victim in this case is not the defendant -- I'm sorry his feelings were hurt when called a "scumbag;" Perhaps if he hadn't carjacked someone this situation could've been avoided. Now don't get me wrong, he deserves a fair trial, and I'm sure he will be represented by a more than capable public defender, perhaps he will even get lucky and get one who can spell "Furor" correctly.

The real question at hand is whether Stephen Caruso would've been held in contempt had he been a minority and called the scumbag carjacker/kidnapper defendant a "scumbag." Hmmm. Tough question. I think Caruso needs an advocate for his civil rights, which have been violated like a freshman girl at a Tulane fraternity house. That's why I have contacted the Reverend Al Sharpton and asked him to intervene. Surprisingly, he has not written me back.

And as for the guy being a scumbag, well, the cops wouldn't have arrested him if he wasn't guilty.

When I sat jury duty in my last semester of law school, I was appalled (and so was the judge) by the corporate attorney (not that there's anything wrong with that, just something wrong with her) who, when asked whether she could follow the law and presume the defendant to be innocent, answered, "No. I don't believe I can. I can't presume him to be innocent."

Okay, so she's honest. But I know I wasn't the only one who took that whole "upholding the Constitution" oath when I was sworn in as a lawyer.