It’s pathetic that I’ve failed thus far to blog about the War Protesters on trial in New York.

After a state jury deadlocked 9-3 in favor of acquittal, the feds took over the case and have prosecuted quite vigorously. The four defendants - who also include Peter J. De Mott, 58, and Daniel J. Burns, 45 - are facing federal charges that include damaging government property and conspiracy to impede an officer, stemming from their protest at a military recruiting office on March 17, 2003. They are looking at up to 6 years in prison. 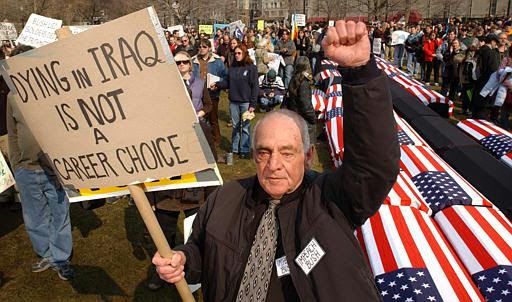 On Wednesday, Miroslav Lovric, the assistant United States attorney, finished his case after three police officers and a military recruiter testified. The recruiter, Staff Sgt. Rachon Montgomery, described two protests. During the first, in December 2002, he said, activists, including those on trial, entered his office in the Ithaca suburb of Lansing, lay down as if dead and refused to leave. On March 17, 2003, the four members on trial returned to the office, poured a few ounces of blood on the wall and again refused to leave. Other protesters stayed outside and prayed.

Sergeant Montgomery testified that he was inconvenienced by the disruption and was upset when he discovered he had gotten their blood on his hands. But he also said he found the group to be friendly.


The judge, apparently didn’t. He's held 3 of the defendants in contempt.
Posted by Indefensible at 9:32 PM