Imagine what it's like when you can't tell your jailers that you're supposed to be free. That's exactly what happened to Joseph Heard. 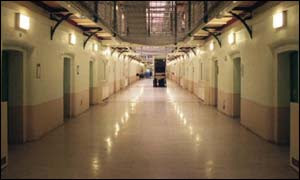 Mr. Heard was illegally held in the D.C. Jail for nearly two years after a court ordered him to be released from custody. During his unlawful imprisonment, the District never provided Mr. Heard with any communication assistance, even though he is deaf and unable to speak. As a result, he was unable to effectively communicate to anyone the fact that he was being
illegally held. While he was illegally detained, the private contractor --the Center for Correctional Health Policy and Studies, Inc. (CCHPS) --performed medical testing on Mr. Heard and gave him potentially-dangerous anti-psychotic medications, all without communicating to him the dangers of those treatments or obtaining his informed consent.
Posted by Indefensible at 1:00 AM

Above link is a spammer asshole.

And... wow. I'm sure that the guy will get a juicy settlement out of this, but what a horrible story.