Despite the constant nonsensical talk of a "liberal media bias" any PD will tell you that on criminal justice issues liberal or conservative makes no difference--poor criminal defendants get a raw deal every time. 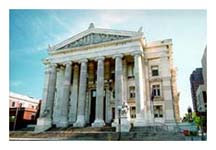 So here's an interesting issue: In the absence of a specific statute, can someone be charged with murder if there is no evidence of an intent to cause death? Simple answer: No. Of course not--intent is a critical element of any specific intent crime. So when the Washington State Supreme Court did the obvious and voided a number of murder convictions holding that when an assault led to an unintended death, the highest charge should be manslaughter, rather than see it as a clear victory over outrageous prosecutorial over-reaching, the seattle post wrote a piece which (gasp) focuses on the fury of an abused kid that his stepdad was getting out of prison.

Posted by Indefensible at 7:11 PM