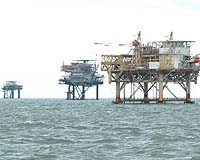 Um yeah. And this is happening in an era of high gas prices and obscene profits for oil companies. Frankly, I don't understand why we're not pounding this issue with voters.
Posted by Indefensible at 6:14 PM

Bush the Younger came to power in January of 2001 and instead of honoring the contract and harvesting the much needed natural gas, dragged the suit out running up the oil companies’ legal expenses and denying the American people the much needed domestically produced energy. In 2002 as the gas and oil prices were raising drastically, Bush proposed buying back the leases instead of tapping the much needed domestic energy source.
The oil companies had had enough. There was no way they could continue to fight. The government didn’t care what the suit cost because they have unlimited tax dollars to spend to fight against the interests of the American people. The oil companies settled and enough domestic natural gas to heat every home in Florida for 16 to 20 years is now permanently blocked from getting to the American people. Reacting to the news of the settlement, R. Skip Horvath, president of the Natural Gas Supply Association, said; “The Destin Dome was one of the largest fields in the Gulf of Mexico. We cannot continue to chisel away at America’s own resources and expect to continue to be self-sufficient in filling future demand. National energy supply has certainly been handed a setback.” But the Destin Dome fiasco isn’t the only case where liberal hacks blocked the domestic production of oil and gas reserves. Huge reserves off the coast of North Carolina’s outer Banks are also denied to Americans. Other large reserves are also languishing untapped as Americans ship billions of dollars to despots and corrupt regimes around the world. The truth is, the United States is awash in domestic oil and natural gas.

By: John Bender
The real problem of the artificially high price of oil and everything made from it or shipped is that our liberal politicians will not allow companies to tap into most of our own oil. Both Democrats and liberal Republicans are at fault. The Destin Dome is just one glaring example of liberal politics trumping both our national security and national economic interests.
The Destin Dome lies 25 miles south of Pensacola, Florida. It contains more than three trillion cubic feet of much needed dry natural gas. Chevron acquired leases at Destin Dome in 1984 during the Reagan administration. But Reagan was out of office before the field could be developed and Bush the Elder came to power. Bush the Elder imposed an ill-conceived moratorium on leasing oil and gas fields off most of the Florida coast. The initial hydrocarbon discovery on the structure occurred in 1987 on Chevron’s Block 56 lease holding. In accordance with the Coastal Zone Management Act, Chevron submitted an exploration plan to both the U.S. Minerals Management Service and the state of Florida, seeking approval to proceed with drilling operations. Bush the Elder came to power while the application was pending and the Bush Commerce Department sat on the application waiting for Florida to act.
The plan was rejected by Florida political hacks, but the denial was overruled by the U.S. Commerce Department. After delineating the lease, Chevron again submitted a development plan in 1996 and Florida again moved to block them from harvesting the much needed natural gas. Once again Chevron was forced to appeal to what was now the Clinton Commerce Dept. The Clinton administration blocked any ruling by creating a catch 22. Not only did the companies need Commerce to again overrule Florida, they also needed clean air permits from the Environmental Protection Agency (EPA) before drilling could begin. In 1999, the Clinton Commerce Department refused to rule on the appeal until the Clinton EPA acted first. The Clinton EPA refused to act until Commerce ruled. By setting up this shell game the Clinton administration left the matter to languish in bureaucratic hell, and the much needed natural gas untapped.
Finally disgusted with the Bush and Clinton administrations’ failure to honor their contract, Chevron and partners filed a lawsuit against the U.S. government for denying the companies “timely and fair review” of plans and permits and an appeal concerned with the Destin Dome 56 Unit On July 24, 2000. The Clinton administration lawyers dragged their feet on the suit and it outlived the administration.