I woke up this morning and stumbled across a fantastic photo essay called "The Face and Voice of Civilian Sacrifice in Iraq" by my old college friend Adam Nadel. It is published in Today's New York Times. 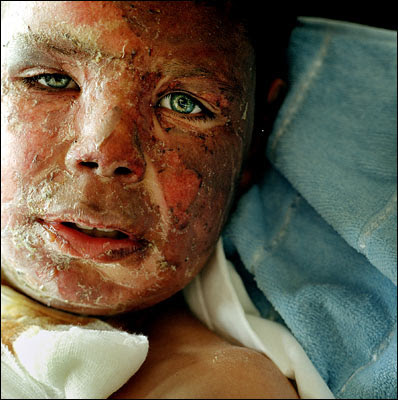 One of the photos in Adam's NYT photo essay

The Times describes the essay as follows:

"To take his own measure of the war for The New York Times, Adam Nadel broke from the compulsions that dictate the days of many photographers in Baghdad, the suicide bombings and roadside explosions and assassinations that fill the morgues and the hospitals. Over weeks, he went in search of those who had survived attacks, and others whose lives had been upended by the violence. He visited them in their hospital wards, in their neighborhoods, and in their homes, and captured, in images and in words, what the war has meant for them.

Their portraits and their stories compel attention, not because they have endured worse than others, but because their miseries are so commonplace, because they stand for what thousands of Iraqi families have endured, directly or through ties of community and tribe. In his or her own way, each of these survivors is a totem for all, in a war where nobody has an exemption from the bombs and the bullets and the carelessness, or mischance, that determines who lives and who dies."

Adam's work is fantastic. And the images portray, some of the more graphic images I'd complained we were missinghere.

Another of Adam's pictures--this from the West Bank

For more of Adam's great work, check out his photo essay called"Rwanda Testimonies".

Great job. Congratulations man.
Posted by Indefensible at 10:42 AM