Why Criminal Defendants Get a Raw Deal...

Those who complain about defendant's constant appeals and delaying tactics seem utterly unaware of just how rarely any of those appeals yield a fruitful result. They also tend to forget about prosecutorial delay. Most of this is an informational distortion. Even though a miniscule number of the criminal cases appealed are ever reversed, pretty much every time one actually is, we read about it.

While crazily pro-prosection decisions rarely make the papers, when they do they provide a nice window into just how militantly anti-defendant most judges are. Here's a nice example: 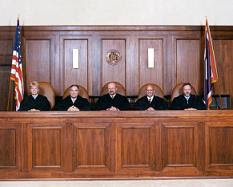 On April 11, 1980, two years and four months later, a grand jury in the District Court of Natrona County, Wyo., indicted his wife, Rita Ann, for murder in the first degree. Asserting her innocence, she moved immediately for a preliminary hearing. In a separate motion, she demanded a speedy trial.

On Aug. 22, 1980, after the state failed to establish probable cause, the District Court issued an order dismissing the indictment.

On March 5, 2004 , the state suddenly revived the murder charge against her. Roughly 24 years had passed since the original indictment. She again moved to dismiss as a violation of her constitutional right to a speedy trial.

The District Court granted her motion. Judge W. Thomas Sullins noted that during this period, the county sheriff's two investigators had died. Two key witnesses for the defense also had died. The fatal weapon, a .243 Winchester rifle, had disappeared. The victim's watch, thought to be important evidence, was no longer available. Over the years, various audiotapes, transcripts, records and polygraph examinations also had vanished. In a "non-inclusive" list, the judge counted 14 items of lost evidence -- enough to demonstrate that the delay had critically prejudiced the defendant's ability to prepare for trial.

Two months ago the Wyoming Supreme Court reversed. Chief Justice Michael Golden conceded that 24 years and eight months, by his count, had elapsed between the indictment in 1980 and the scheduled trial in 2005. Nevertheless, there had been a long hiatus when Mrs. Humphrey was not in custody and no indictment was actively pending against her. Those 24 years, in the court's view, had to be excluded from the calculation of the "speedy" trial required by the Constitution's Sixth Amendment.

This reasoning seems to be belied by the applicable supreme court precedent--the 1972 opinion in Barker v. Wingo . That case involved the bloody murder of an elderly couple in Christian County, Ky. in 1958.

Justice Lewis Powell spoke for a unanimous court, but he clearly had a hard time in establishing guidelines for appeals under the Sixth Amendment's "speedy" clause. Nothing good could be said of Willie Barker or his co-defendant, Silas Manning. The crime was exceptionally brutal, but the evidence was unusually weak. For tactical reasons the commonwealth wanted to try Manning first. If he were convicted, he could testify against Barker. It took six trials before Manning finally was convicted.

Meanwhile, Barker too was mostly out on bail. Over a period of five years his trial date had been continued 16 times. With Manning's testimony, Barker at last was tried, convicted and sentenced to life. He appealed under the "speedy trial" clause of the Sixth Amendment.

Powell, a soft-spoken Virginian, was tough on crime. His heart bled for victims, not for their assailants. He had little sympathy for Barker, but five years of delay? As a constitutional matter, he asked, how speedy a trial is a "speedy" trial? He waffled: "We cannot definitely say how long (a delay) is too long in a system whose justice is supposed to be swift but deliberate. ... It is impossible to do more than generalize about when those circumstances exist."

I don't think I understand all the jargon, but how is this different from the police cold case squad picking up a 24-year old case and putting together enough evidence to charge it? Surely the defendant wouldn't have a speed trial claim then, right?

Does the original indictment irreversably start start the speedy trial clock, preventing the state from ever charging again after the speedy-trial period has elapsed?

Great question.
Cold case closeouts are subject to statute of limitations issues not speedy trial ones--that's why you almost always see cold cases being homicides--there's no SOL for murder.

This, though is radically different in that someone was indicted, starting the clock, and then the case was allowed to lapse. They're not forbidden from charging again, they just have to do it within the speedy trial time allotted. Remember how all those conservatives argue against DNA testing for those potentially wrongly convicted--suggesting that "finality" is an important value?

Same thing here. At some point after a case is dismissed you have the right to go back to your life without the threat of subsequent prosecution.

Rita Ann Humphrey, widow of my second cousin, did NOT get a "Raw Deal".

In fact, she lived FREE to watch her children grow and have children of their own. She took that away from Jack 27 years ago!

Since the first one was DISMISSED, the clock on her "speedy trial" STOPPED for that 24 year time period. Her new "DEMAND" for a speedy trial started ticking when she was charged the second time.

IF RITA HUMPHREY DIDNT GET A SPEEDY TRIAL. LETS HOPE THAT THE SUPREME COURT TAKES 24 OR 27 YEARS TO DECIDE. SHE TOOK LIFE AWAY FROM JACK. WE DONT NEED CONVICTED MURDERS RUNNING AROUND WITH LAW BIDING CITIZENS. SHE IS RIGHT WHERE SHE SHOULD BE...BEHIND BARS......
REST IN PEACE JACK
HOPE JUSTICE WILL CONTINUE TO BE SERVED

Indefensible is the type that gives the law a bad name... always trying to get the guilty off when they don't deserve it! Let the guilty stay where they belong!!!

I am not ashamed to leave my name, a TRUE friend of Ritas, her sisters, and her children. I thought for sure that this time the courts would see that there was alot of corruption that took place for there to even be a second trail, and I still believe that some day the whole truth will come out....my biggest question is HOW MUCH did it cost the HUMPREYS to get RITA convicted...

It's all bogus . . . Bonnie Humphrey is a flake. I worked with Rita for years and was friends with her oldest daughter. She was/is a great lady. The comment "WE DONT NEED CONVICTED MURDERS RUNNING AROUND WITH LAW (a)BIDING CITIZENS" is the most exaggerated statement I have read thus far. Dig up her criminal record . . . oh, there isn't one other than this case.

I too am not afraid to leave my name. I am the granddaughter of Rita Ann Humphrey. I think people loose sight of what it did to the family that ACTUALLY cared about her. What about her children and grandchildren? How it left them broken and shattered. She has grandchildren who she never got to see born, even a great grandchild. I never met Jack Humphrey, but I know he would be ashamed of what his family has done to his girls. As stated above, "Dig up her criminal record . . . oh, there isn't one other than this case." That couldn't be more true. She never even got a traffic ticket. You want to believe that she did this crime. I've come to peace with what has happened, and the person/people who actually committed this terrible crime will have their justice one day. Their day of reckoning will come.