Evo Morales Gets Me Thinking

Evo Morales was elected to lead Bolivia this week. He's a coca farmer who believes in coca leaf.
And though he's been posturing against cocaine, it does make me wonder what would happen if a country like Bolivia just legalized and taxed production. What if they just said: "Yeah we grow Coca, and that's the official position of our government." 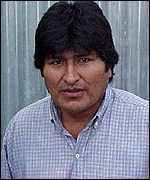 Morales is an interesting guy and his personal story has been a political asset in a country that regularly ranks as the poorest in South America, where more than 60 percent of the people live in poverty and 70 percent are indigenous. A Morales presidency breaks Bolivia's tradition of being led by Caucasian heads of state who hail from the country's elite.

He's built his campaign on bold promises to nationalize Bolivia's vast natural-gas resources and to legalize the cultivation of coca leaf, which is the prime ingredient in cocaine.

In Argentina last month at a summit of hemispheric leaders, Morales condemned U.S. policies, such as free-trade agreements and open markets, that he said exploited poor Latin America countries.

This will be interesting.
Posted by Indefensible at 11:15 PM

What if they just said: "Yeah we grow Coca, and that's the official position of our government."

I don't know, cutting off aid...maybe an invasion?

On the other hand, it's the lack of free trade and open markets that have hurt poor countries. They'd make a fortune selling us cheap goods if they were allowed to. Maybe that's what he meant.

Just because it is used to make cocaine doesn't mean it is evil. Coca leaf has been chewed for centuries in South America as a stimulant to aide travellers at high altitudes and as recreation like the Khat plant in Northeastern Africa. I am pretty sure that it could be used by pharmecutical companies, althouth it is probably replaced by synthetics nowadays. For all we know, it is cheaper and safer than synthetics, but hasn't been studied adequately due to hysteria. I mean, we still use opioids....

"I am pretty sure that it could be used by pharmecutical companies, althouth it is probably replaced by synthetics nowadays."

Up until the end of the 20th century, cocaine was used as a topical anesthetic for medical procedures, especially around the eyes and in the nose. Nowadays, doctors use combinations of more-specific synthetic drugs that don't have as many unnecessary side effects.

I remember reading in the late '80s that medical-grade cocaine sold for $30 an ounce, which should give you some idea of the profits being earned by illegal drug distribution networks.