Two articles in the papers today encapsulated for me everything that is wrong with this country.

The first, from the NYT style section detailed the new trend in super high end cocktails, breathlessly detailing things like the Seablue restaurant's martini made with super-premium vodka and Beluga caviar for $275 or Duvet's off-the-menu drink made with aged cognacs, vintage Champagnes and garnished with a vanilla orchid petal - for an astounding: $1,500. (The club says it has sold five or six Duvet Passions since introducing the drink Valentine's Day.) 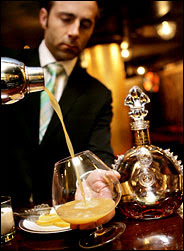 The second describes a study of charitable giving. It finds that working-age Americans who make $50,000 to $100,000 a year are two to six times more generous in the share of their investment assets that they give to charity than those Americans who make more than $10 million. The least generous of all working-age Americans were the young and prosperous - the 285 taxpayers age 35 and under who made more than $10 million - and the 18,600 taxpayers making $500,000 to $1 million. The top group had on average $101 million of investment assets while the other group had on average $2.4 million of investment assets.

Let them drink Louis XIII.
Posted by Indefensible at 9:36 AM

"...to the end that human rights shall be held to be more sacred than property interests..."