A clever providence lawyer who argued that Chief Justice of the RI supreme court should be stripped of his title, got his butt handed to him by the CJ's buddies on the court. 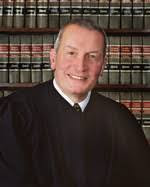 Attorney Keven McKenna's had argued that Chief Justice Frank Williams gave up his job when he accepted a spot on a military review panel. He cited the state constitution, which said elected officials can't hold dual offices.

Clever, if ineffectual.
Posted by Indefensible at 1:12 AM