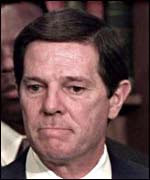 Tom Delay is sucking wind thanks to his antics surrounding the Terri Schaivo case.

His rampant ethical lapses may not have been sticking, but his interventionist nonsense appears to have had a real effect.

A recent Chronicle poll, conducted late last week and published Sunday, indicated that nearly 40 percent of 501 likely voters in his district said their opinion of DeLay is less favorable than last year, compared with 11 percent who said their view of him has improved.

Many said they'd vote for someone else.
Time to start organizing a Dump Delay (Without Delay?)campaign.
Posted by Indefensible at 5:35 PM