"unpopular judges were the cause of three days of pot-banging street protests in the country's capital." Sound Familiar? 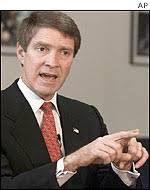 Hmmm. Meanwhile, back at the ranch, Bill Frist is heading to an evangelical conclave to continue his obscene attacks on the judiciary.

Hey guys--yeah Bill, Tom, you... I know you get all hot at the notion of american isolationism, and I get that you serve a guy who, despite growing up the muli-millionare son of a president never went anywhere much past Tijuana, but ahhh...there's a lesson to be learned from Ecuador. This way lies madness.
Posted by Indefensible at 10:32 AM