Former executives in Enron Corp.'s defunct broadband unit who are on trial for charges including conspiracy and fraud have offered to privately boost pay for jurors" 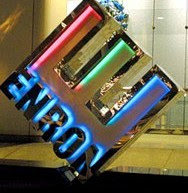 Who says money can't buy you justice? Amazing that a federal judge has even agreed to consider this. Then again Kenny Boy was Bush's single biggest contributor and these Enron guys are his pals.
Posted by Indefensible at 1:43 PM

Brian,
Thanks for reading and posting, but yours is a silly argument. I looked at your post and it seem to me to represent a kind of muddle headed thinking. Every president courts and confers with the heads of huge corporations--they always have access. But the Lay-Bush connection is different in kind, not degree. Something the simple 'bush-basher' label can't refute.

And believe me--there are much more important issues to bash bush on than this one.